I seem to stand in a thinly populated corner of the room when it comes to Stadia. Because I actually like it.

The new streaming platform from Google was polarising well before launch, and those with contrary opinions have seen little to change their minds.

The inherent mistrust of Google is a significant part. There are suspicions in the gaming community over data capture and subsequent usage (or abuse). That’s fair, I think.

It is also a shared concern of mine that, given their track record, the search engine giant may well abandon this whole endeavour in a year. Consumers would be left in the lurch.

What appears to get the greatest hate, though, is the business model.

Some people are convinced that you are paying full price for a game you will never own. I understand this argument while physical media still exists. Still, anyone buying all digital (which I do) has little extra rights to their games than on Stadia.

One example is Bioshock on iPhone. I own that game, but can’t download it, ever again.

Another is the Catalina update on macOS, removing all 32-bit Steam games. Which were most of them.

The majority of attacks on the business model object to the concept of having to pay to play games you own. I’ve seen it multiple times on community threads.

This is slightly disingenuous, though. You don’t need a subscription to buy and play games, especially now Stadia Base has launched. You need to pay monthly to play in 4K, which is a sticking point for some.

If you do resent paying for a privilege that shouldn’t be separate from a game purchase, it’s sweetened by an ever-growing list of games for Stadio Pro members.

The angry forums don’t necessarily see it that way. Eventually, someone asks the question: ‘who signed off on this business model?‘

Despite the scepticism of the (apparent) masses, there is precedent for what Stadia is doing.

It’s not Netflix for games.

Stadia is Audible for gaming.

If you cancel, you keep what you have bought with credit and money, but lose access to everyone get else.

This is similar to Stadia. Each month you subscribe, you get free games. You can buy any other games you like, steam them and play online multiplayer etc.

If you cancel, you keep the games you paid for, can play them on any device with access to chrome or a Chromecast, except the Stadia pro games. That’s the main difference to Audible.

Apart from that, it’s very similar (note – not the same, the 4K issue remains).

I found Audible strange when I first signed up, but I got used to it. In the end, I cancelled my sub because I wasn’t using the free content enough.

On Stadia, the free content is solid so far, and I’m building a diverse collection. But I’ve also bought a few games I’m enjoying as well.

As with both, if I leave, then reactivate the monthly premium, I get full access back. It fosters the more friendly ‘drop-in, drop-out’ feel, far preferable to the more punitive approach to leaving a subscription other services adopt.

I’ll never convince those who dislike game streaming versus console ownership to change their minds. I don’t want to either, opinions are personal and should be respected.

I also won’t argue against the criticism levelled at Google. It just seemed to me that a lot of ire was directed towards the business model, and I’m not sure the objection holds up under scrutiny. 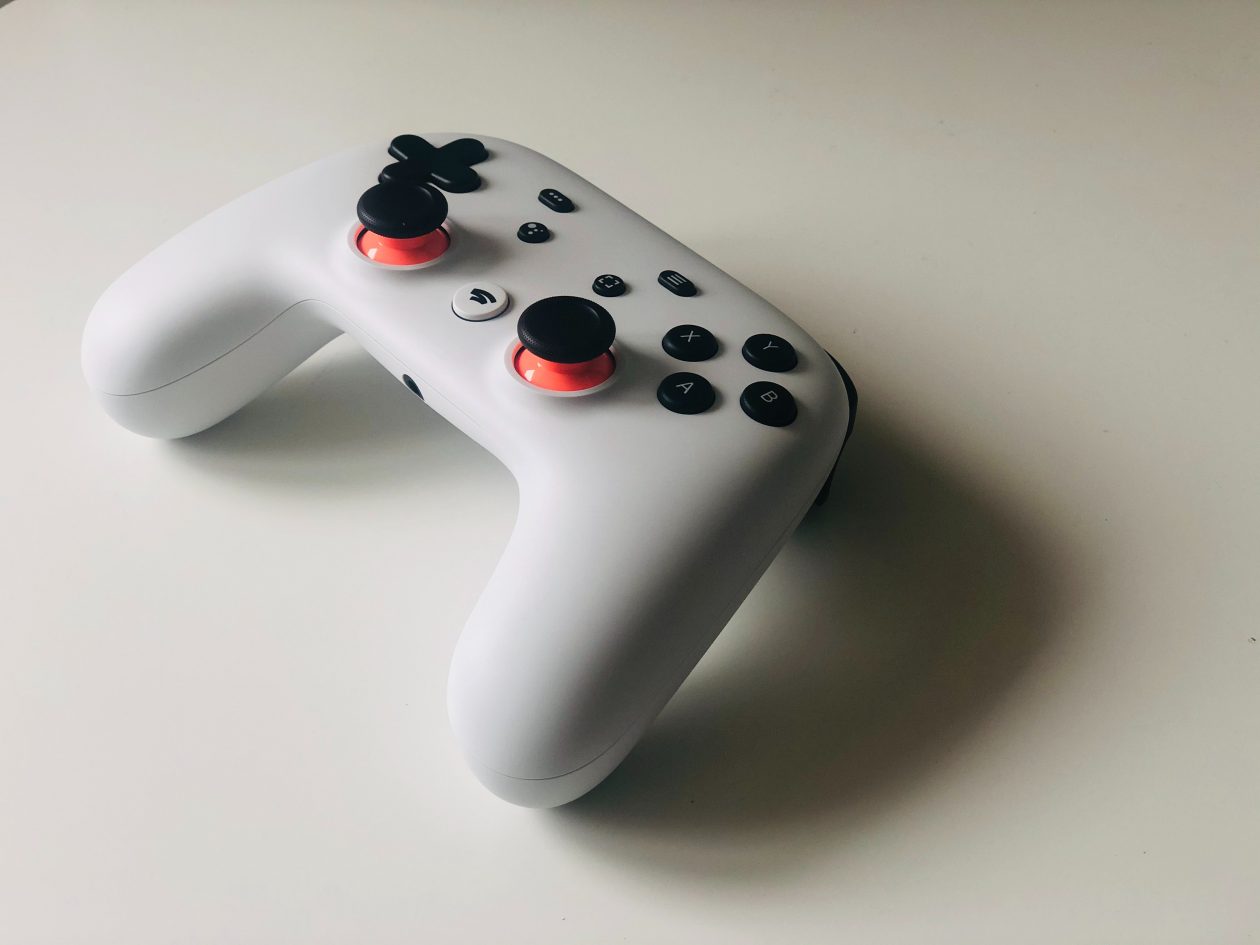 Photo by Cristiano Pinto on Unsplash

Despite the adverse reaction on most online forums, I really liked the concept of Stadia from the unveiling.

No downloads or updates, no specialised hardware taking up space and play on any screen, anywhere?

I convinced myself it was worth the money, so I pre-order the Founders Edition before the release in November 2019.

I cancelled the order before shipping, though.

That’s not uncommon for me, though. I often get swept up in the thrill of new technology and want to be the first in line to use it. And as I pre-order so far in advance, it gives buyers remorse time to set in.

Stadia succumbed to the latter, and I decided to wait for launch.

Reviews I saw told of lag, from controller inputs to frame rates, even on some of the fastest broadband I’ve ever heard of.

I breathed a sigh of relief at the money I’d saved.

As a father of two with a busy job and a writing habit, I don’t get much free time for gaming. I still love it, despite this.

My eldest son is getting to the age where I can play some Nintendo Switch games with him, despite his dislike of any games with enemies. He’s solid at Mario Odyssey but runs away from any Goombas in tears. He loves Luigi’s Mansion 3, and we’ve had some great sessions in co-op, though he hides from any ghostly interactions.

I get the chance to play on my own sporadically, mostly when I travel.

But when I crave a full-fat, big screen TV experience I have an Xbox One. I have it set to keep the games and software updated, so it limits the interference (a common gripe).

My problem is my indecision at what to play and making sure I have it downloaded. (Full disclosure – I’m all digital, even on the Switch).

Most games these days are massive downloads. The most recent Gears titles, GTA V, Halo MC Collection (although – that’s a lot of games) are around one hundred gigabytes or more with 4K texture packs.

In some cases I’ve downloaded these monsters patiently, only to dabble in them for occasional ten or twenty-minute sessions.

Also, I have to be on my TV in the living room.

All this meant somehow, despite the negativity, Stadia kept calling.

In a moment of weakness, I managed to get a Premiere Edition on a good deal with a Stadia Pro Pass for three months.

The first thing to note, free games from the subscription remain available for the most part. I signed up at the start of March, expecting the free games to be two Steamworld titles and GRID.

What I didn’t realise was that I could also ‘claim’ the February titles (except Farm Simulator), as well as January games and Destiny 2 from launch.

Having paid under the asking price, using just my Stadia Pro Pass, I had seven games to play.

Sitting at my laptop over lunch, in a room far away from our router, I decided to try Thumper. It seemed an appropriate choice with the laptop inputs.

The result was fantastic.

I played through a few runs on level one with barely a hiccup, on a thin and light laptop with no graphics card. No fans kicked on, no additional heat on my thighs, it was adding no stress to the device.

Later that day, I hooked up the Chromecast Ultra with Ethernet cable to my 4K TV. Destiny 2 loaded quickly, and I made my way to The Tower with no noticeable lag and only a frame rate dip or two in the most extreme action.

It felt just as good as a console experience.

The final test on day one was my personal Mac in the upstairs office. I played through the intro to Gylt (really enjoying that so far), a little more Destiny 2 and the start of Metro Exodus. The performance was high fidelity, smooth gaming on a Mac. It can be done.

There are shortcomings, and for some, these would be dealbreakers.

It’s in the back of my mind that Google could pull the plug at any time, and it makes me reticent to put much money in. If you feel that way, or mistrust Google, I get it.

But I don’t see the Stadia Pro Pass as negatively as most. I’ve seen it is argued that it’s a paywall for 4K streaming, which is partly true, but it’s the same as the PS Plus or Xbox Live service. You pay money to get a service (in their case online gaming) as well as access to some free games.

As a huge Apple fan, not being able to play on my iPad Pro – let alone my iPhone, seems a huge miss. If this continues, my disappointment will grow.

Overall, however, I’m heartened by the first month or so.

I don’t have blazing internet, by the way, its around 40mbs download. When the free Stadia tier comes out, I would heartily recommend people try it, keeping my fingers crossed this doesn’t affect performance.

To me, it does feel like the future of gaming. If device support is rolled out, and the experience remains the same, I honestly think it would be my preferred way to play.