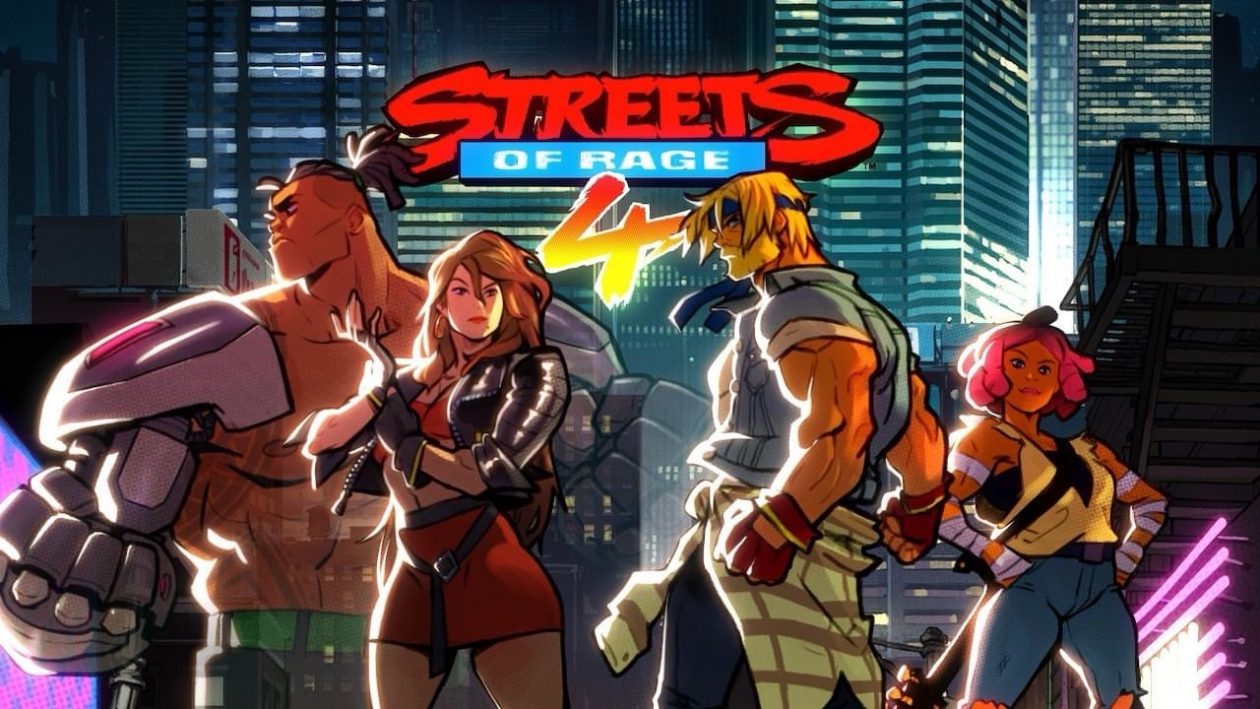 The latest Streets of Rage instalment earns its place in the legendary brawling series, stopping just short of greatness.

The publisher, Dotemu, and co-developers Liardxube and Guard Crush Games, deliver a love letter to the best sideways scrolling beat ’em ups from the 90s. This is unapologetically a Streets of Rage game: if you liked it then, you’ll like it now.

From the moment you start the game, the similarity to each predecessor is clear. The new hand-drawn art style is gorgeous, but the beats are all the same. From the opening story crawl with the city in the background to the character select screen, it’s as it was back in the day.

Every punch satisfies, making the screen shakes with each connection. The music, while never achieving anything genre-defining like Streets of Rage 2, straddles the right line between remix/homage to the source material while spinning new tracks of its own.

The character roster offers surprisingly diverse play styles. Axel and Blaze are old favourites and solid sluggers, Floyd is a slow tank that deals damage up close. At the same time, Cherry offers speed and variety in attacks.

She quickly became my favourite character.

Adam is unlocked quite early, and he plays okay, though I haven’t spent much time with him so far. His entrance in the story is pretty darn cool, though.

The first level doles out the nostalgia, serving up a few frames down a violent memory lane. The enemies are riffs on an old formula with a few new variants, there are knives, apples, turkeys, so far, very familiar.

And Just when you think you know what’s coming, a new mid-boss steps out. The occasional subversion of expectation makes it exciting for returning players without any detriment to newbies.

Without wanting to spoil too much, there are some lovely call-outs to the original series. A boss called Estel has a special move fans of the first game will recognise as she calls in police support. One level sees you walk through a recognisable bar with a strange bartender and blast from the past boss.

Streets of Rage 4 doesn’t rely on blasts from the past alone, though. Some levels stand out on their own, the surreal art gallery, moody peer and Chinatown proving memorable after the credit’s roll.

Each level felt the right length and never relied on the same tricks. Some throw mid-bosses, others it’s a challenging variety and volume of enemies in waves. The developers tried different things to keep us guessing, and it paid off.

Streets of Rage hasn’t moved on much since the last entry in 1994. This is not the same leap a series like Resident Evil made from the third and fourth games.

In gameplay terms, this is especially true for the controls. Gamepads have progressed considerably since the original trilogy. Yes, there is a separate ‘pick up’ button now, and the back-attack is mapped to the shoulder, but the move set for Axel is identical to Streets of Rage 2 & 3. I kept tapping the back-attack button expecting to block or dodge. There is undoubtedly enough challenge to warrant this mechanic, and it would switch up the gameplay. I would argue that there was a more significant advance in controls between Streets of Rage 1 and 2 than the third and fourth instalments. It felt like a missed opportunity for the whole game.

The bosses don’t quite hit the spot either. I thoroughly enjoyed some, Shiva on the rooftop with cherry blossom trees looked great, and the first encounter with Mr Y was bombastic. But nothing felt as inventive as the likes of Zamza and Jet from the past. Shout out to whoever designed DJ though. That was a set-piece the final third of the game deserved.

Battle Mode is fun, offering local play and online matches. I can see this being a better option once you uncover all the playable characters, though I haven’t discovered many yet.

The visual flair entertains throughout, the heft of the combat and responsiveness of the controls make it a joy to play. The story, while light in content, is delivered in compelling, bite-size comic panels between levels.

The shortcomings, while few, hold the game back. The bosses I can forgive as there is still quality in there. It’s mainly the controls which rob the experience of some needed depth.

Streets of Rage 4 is included with Xbox Gamepass and is an excellent addition to the library. I also played it on Switch and can say it feels at home on the big screen and on the go. If you loved the original trilogy, you’ll like this. If you’re new to sideways scrolling beat em ups, this is the best example in years.

It’s worth your time and money, and I highly recommend it.

I seem to stand in a thinly populated corner of the room when it comes to Stadia. Because I actually like it.

The new streaming platform from Google was polarising well before launch, and those with contrary opinions have seen little to change their minds.

The inherent mistrust of Google is a significant part. There are suspicions in the gaming community over data capture and subsequent usage (or abuse). That’s fair, I think.

It is also a shared concern of mine that, given their track record, the search engine giant may well abandon this whole endeavour in a year. Consumers would be left in the lurch.

What appears to get the greatest hate, though, is the business model.

Some people are convinced that you are paying full price for a game you will never own. I understand this argument while physical media still exists. Still, anyone buying all digital (which I do) has little extra rights to their games than on Stadia.

One example is Bioshock on iPhone. I own that game, but can’t download it, ever again.

Another is the Catalina update on macOS, removing all 32-bit Steam games. Which were most of them.

The majority of attacks on the business model object to the concept of having to pay to play games you own. I’ve seen it multiple times on community threads.

This is slightly disingenuous, though. You don’t need a subscription to buy and play games, especially now Stadia Base has launched. You need to pay monthly to play in 4K, which is a sticking point for some.

If you do resent paying for a privilege that shouldn’t be separate from a game purchase, it’s sweetened by an ever-growing list of games for Stadio Pro members.

The angry forums don’t necessarily see it that way. Eventually, someone asks the question: ‘who signed off on this business model?‘

Despite the scepticism of the (apparent) masses, there is precedent for what Stadia is doing.

It’s not Netflix for games.

Stadia is Audible for gaming.

If you cancel, you keep what you have bought with credit and money, but lose access to everyone get else.

This is similar to Stadia. Each month you subscribe, you get free games. You can buy any other games you like, steam them and play online multiplayer etc.

If you cancel, you keep the games you paid for, can play them on any device with access to chrome or a Chromecast, except the Stadia pro games. That’s the main difference to Audible.

Apart from that, it’s very similar (note – not the same, the 4K issue remains).

I found Audible strange when I first signed up, but I got used to it. In the end, I cancelled my sub because I wasn’t using the free content enough.

On Stadia, the free content is solid so far, and I’m building a diverse collection. But I’ve also bought a few games I’m enjoying as well.

As with both, if I leave, then reactivate the monthly premium, I get full access back. It fosters the more friendly ‘drop-in, drop-out’ feel, far preferable to the more punitive approach to leaving a subscription other services adopt.

I’ll never convince those who dislike game streaming versus console ownership to change their minds. I don’t want to either, opinions are personal and should be respected.

I also won’t argue against the criticism levelled at Google. It just seemed to me that a lot of ire was directed towards the business model, and I’m not sure the objection holds up under scrutiny.