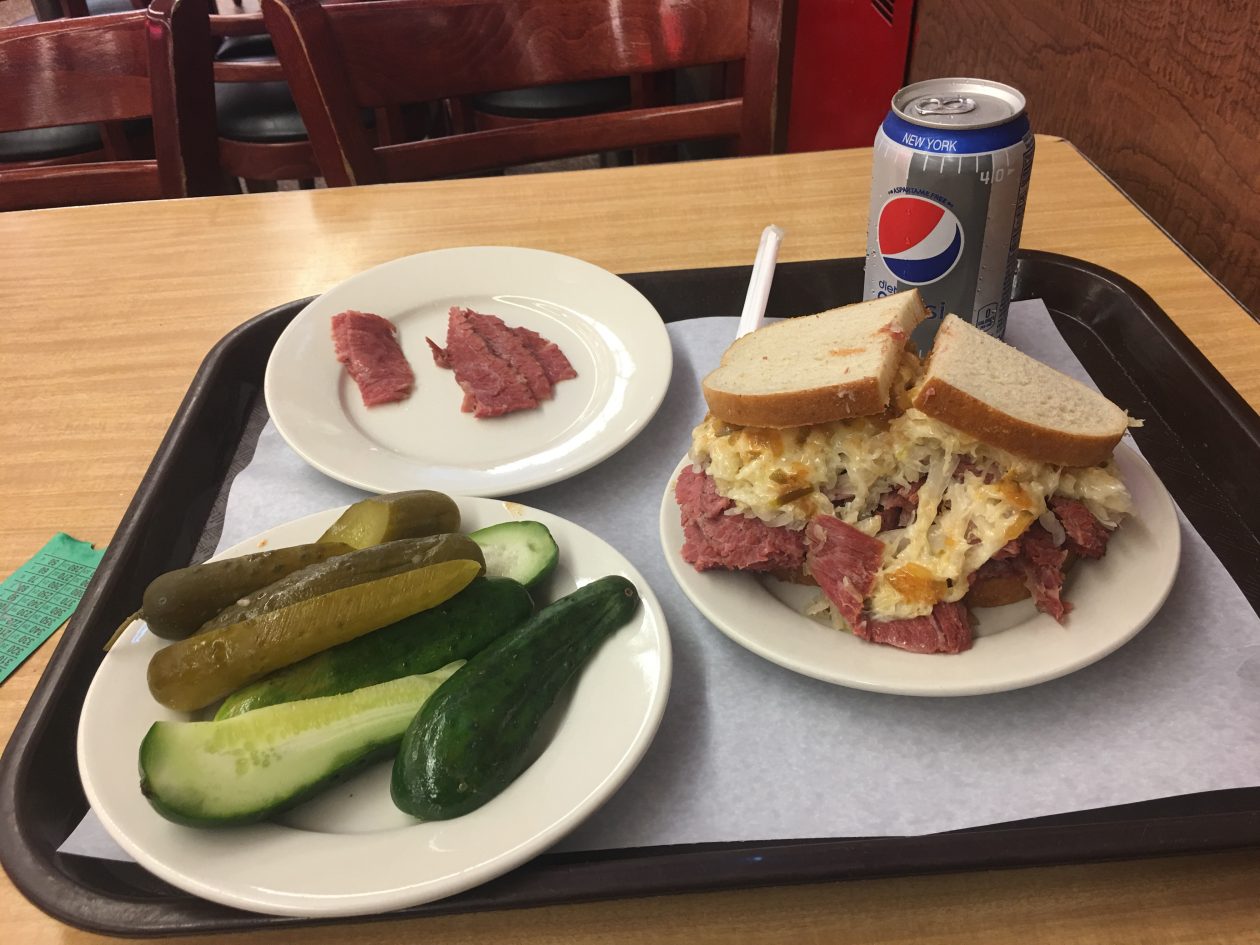 For reasons I won’t go into here, I should have been in New York with my wife. Instead, I was alone.

Katz’s Deli was the only benefit of being on my own, as my wife wasn’t keen on making the trip for a sandwich.

I am wired differently. For a Katz’s sandwich, I would have gone much further.

Of course, this was all assumed at the time. I’d never been to Katz’s before. I had seen it in When Harry met Sally and Man vs Food. I’d read about it on articles and blogs.

I was aware of its importance and had already decided it was going to be great.

Spoiler; it is great.

The jet lag next morning in the US is the toughest, at least for me. I never sleep well enough or long enough that fist night, let alone with the sense of guilt I had about being there alone.

I’d been up at five AM eastern time, which isn’t too bad in New York. It’s quiet but not dead, and plenty of places are open.

A nearby Starbucks provided me with a caffeine boost and a brisk walk to Times Square and back did me some good. I rested at the hotel after that before heading to the subway.

It was Katz’s Deli time.

I arrived at just past nine in the morning. It was empty. As good as the food is, not many locals went there for breakfast. I started to wonder if they’d even serve sandwiches at that time.

Luckily, they did, and I was asked what I wanted by a nice lady behind the counter.

There was only ever going to be one answer; a Rueben, with corned beef and a side of sweet and sour pickles.

I’d first visited New York seven years previous and my only sandwich experience with was Carnegie Deli. I’d ordered a pastrami sandwich on rye. As I left, the waitress shouted at me for not giving a big enough tip, despite me collecting it and enduring slow service. I took it back to my hotel, which was nearby and found it dry and disappointing.

That first trip really started my interest in American cuisine, though, and I began to watch as many shows as I could on the subject. I’d seen the Rueben on TV a few times and decided the cheese, sauerkraut and Russian dressing was just what my sandwich at Carnegie Deli was missing.

By the way, Carnegie Deli shut down a few years back. It stood proudly near its namesake hall for decades; then was gone. Sad.

Back to Ruebens, My first one was in Orlando. It wasn’t good. The second was in LA and not much better. I tried a ‘southern style’ Rueben in Las Vegas and really liked it. Still, with coleslaw instead of sauerkraut and pork instead of beef, I now consider it sacrilege. It wasn’t until I got to New York with my wife a few years later that I tried my first proper NYC version.

It was from another now-closed deli on the Upper West Side called Arties. It was freaking amazing. My wife and I still talk about it. We shared the sandwich while sitting on a rock in the sunshine in Central Park. That, my friends, is a memory.

By now, I was craving more than just any Rueben, though. I had to go to one of the originators in the US, and it was only ever going to be Katzs’. You might roll your eyes at being so obvious, but you know what? Germans make great cars, Apple knows a thing or two about phones and Italy are nifty in the kitchen, If you’re after something great, seek it out from the greatest.

Katz’s is unassuming, just tables edged by a long counter, where you make your choices. Not long after I’d ordered my sandwich from a nice lady, she cut off a few chunks of meat and placed upon the counter.

I stared at them, wondering what they were for.

After a while, she said, ‘they’re for you to try.’ I must have looked like a real amateur.

‘Oh. Thanks,’ I replied and felt too embarrassed to take more than one piece. I made a stupid yummy noise and watched the lady work. By the way, they warm up the sauerkraut and cheese in a microwave. Do not fear this; trust the process.

My food was ready in no time. I was quickly sitting alone in the restaurant, devouring the sandwich, pickles and leftover meat samples.

I experimented with the mustards on the table, I decided I wasn’t too fond of the sour pickles, and I even took a picture of the chair from When Harry met Sally. It was all incredibly lovely, except the Rueben. That was sensational.

It’s strange how much higher the standard can be for something with so few ingredients.

I’ve eaten burgers all over, and you can find good, great and even spectacular examples in several places. The same goes for pizza.

Only one city to get them; New York. And if you’re looking for the best one, the choice is even easier.